How It’s Made: Gasoline 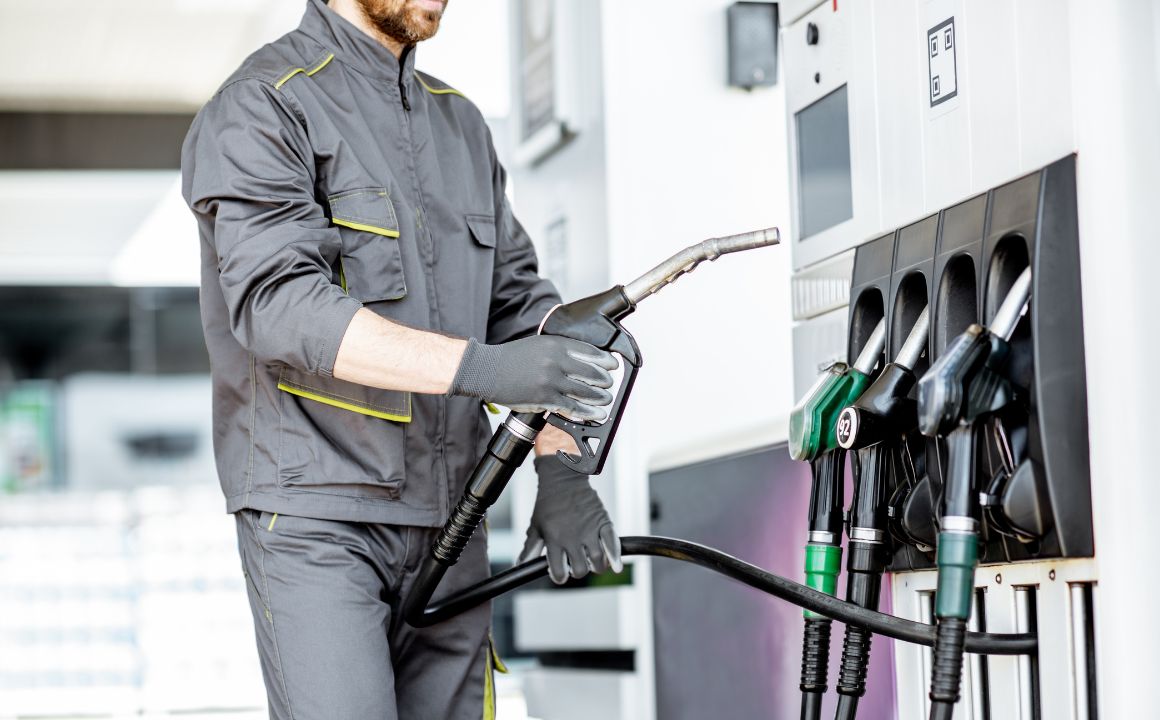 The prices at the pumps have been higher than ever recently. In fact, US gas prices were the highest they’ve ever been which has many people wondering why they’re high and if the prices will go down. Some are also wondering how it’s made. In reality, the two go hand-in-hand.

Gasoline is made from crude oil (also known as petroleum). Crude oil (or petroleum) is a fossil fuel which means it is produced from the remains of plants and animals. These plants and animals lived millions of years ago and are covered by sediment which when exposed to weather, erosion, and other environmental factors, produces hydrocarbons.

When a crude oil source is found, drilling begins. Drills bore holes under the surface of the Earth in the area where crude oil has been found. Fun fact: these drills can go as far as one mile deep! The hole created by the drill acts as a well. With the addition of water into the soil, mud is created and this mud pushes cracked rock to the top of the hole at which point it is removed. This also ensures the crude oil stays below the surface. Once it has been determined the reservoir is ready for oil extraction, a pipe is inserted into the hole.

This pipe is called a casing. This casing has holes in it that allow oil from the reservoir to enter the pipe and bring the oil to the surface of the Earth. Once recovered, the crude oil is stored in large tanks. From those tanks, oil is transported to a refinery via pipeline, ship, or tank cars on rail.

At the refinery, crude oil is broken down into a variety of other materials to include gasoline and diesel fuel. In fact, gasoline was discovered when crude oil was originally refined to produce oil and kerosene for lamps, prior to the invention of electricity. With the addition of heat (ranging from roughly 60 degrees Fahrenheit to 1100+ degrees Fahrenheit), crude oil is distilled. Distillation is where we create the various byproducts of crude oil. The byproducts made are dependent upon carbon atoms. Remember, crude oil consists of liquid hydrocarbons. Hydrocarbons consist of carbon atoms that link together. These links of carbon atoms can vary in length and depending upon the length, will have different properties, characteristics, or behaviors. 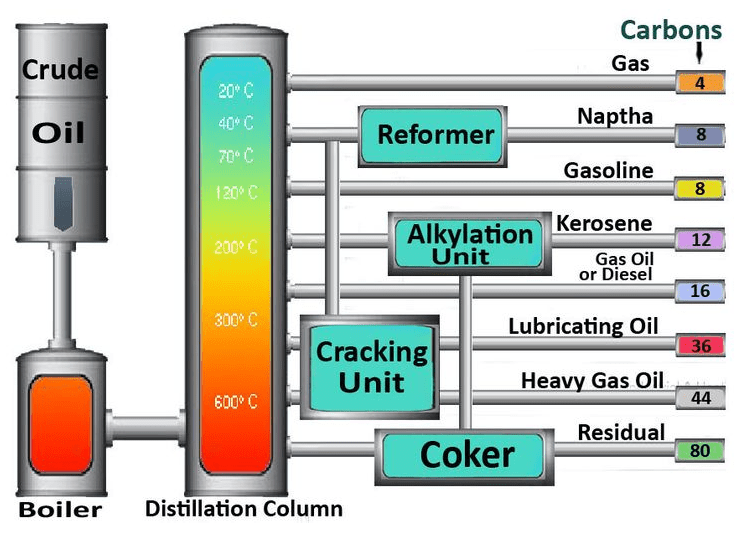 Once distilled, the byproducts require further refining. Additional refining processes include catalytic cracking, coking, reforming, and alkylation. These are all fancy words that describe the different ways in which the crude oil coming out of the distillation column is further refined and purified. Once finished, it is sent to refinery storage tanks.

This step is all about blending. From the refinery storage tanks, gasoline is sent to smaller blending tanks via tanker, barge, or pipeline. Here, gasoline is typically blended with ethanol. Blending is done to create different grades of gas. Remember, when you pull up to the pump at a gas station, you see a variety of options. Diesel, E87, E88, etc. These are the grades of gasoline. Different grades of gasoline are made to meet different performance requirements of a vehicle. An example of this is gasoline produced for use in the winter. To improve a vehicle’s ability to start with a cold engine, gasoline is blended to a consistency in which it will vaporize more easily

Once blended and ready for use, tanker trucks deliver the finished fuel to a gas station. The gasoline is stored in tanks underground at each gas station and from these tanks, are pumped up and out of the gas pump once you start it up. If you’re interested in more about that process, check out this article from howstuffworks.com. 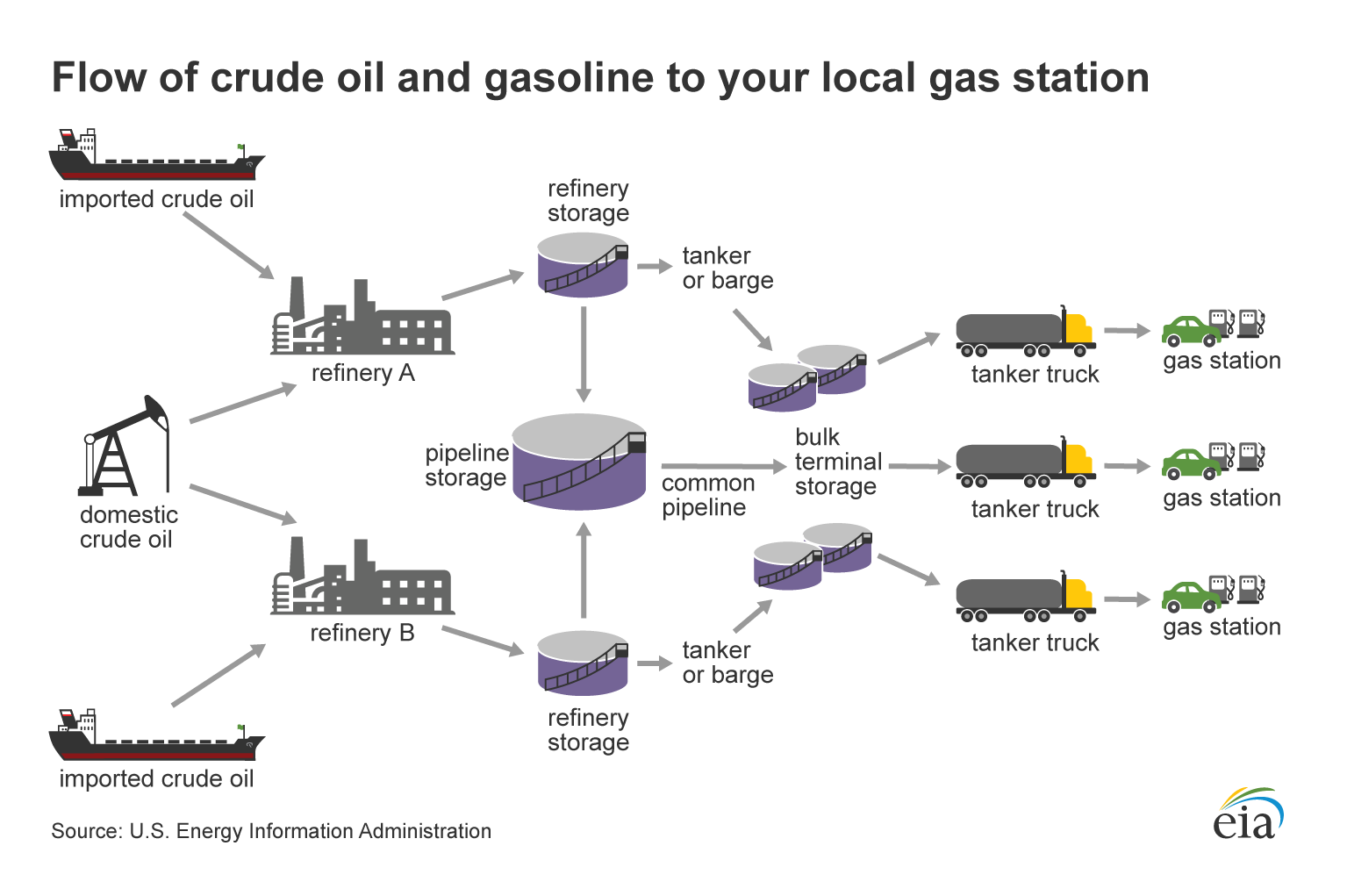 So, how does this all tie into the cost of gasoline prices? Well, it comes down to supply and demand. If supply is low but demand is high, prices are higher too. Therefore, if we are not drilling (onshore or offshore) for crude oil or if we are not receiving imported crude oil, we are not refining. If we aren’t refining, the supply is low while demand stays the same or increases. Of course, drilling is a hot button topic and when it comes to importing, supply chain and geopolitical events (which we’ve recently seen) will decrease supply. Thus, gasoline prices and gasoline production go hand-in-hand.