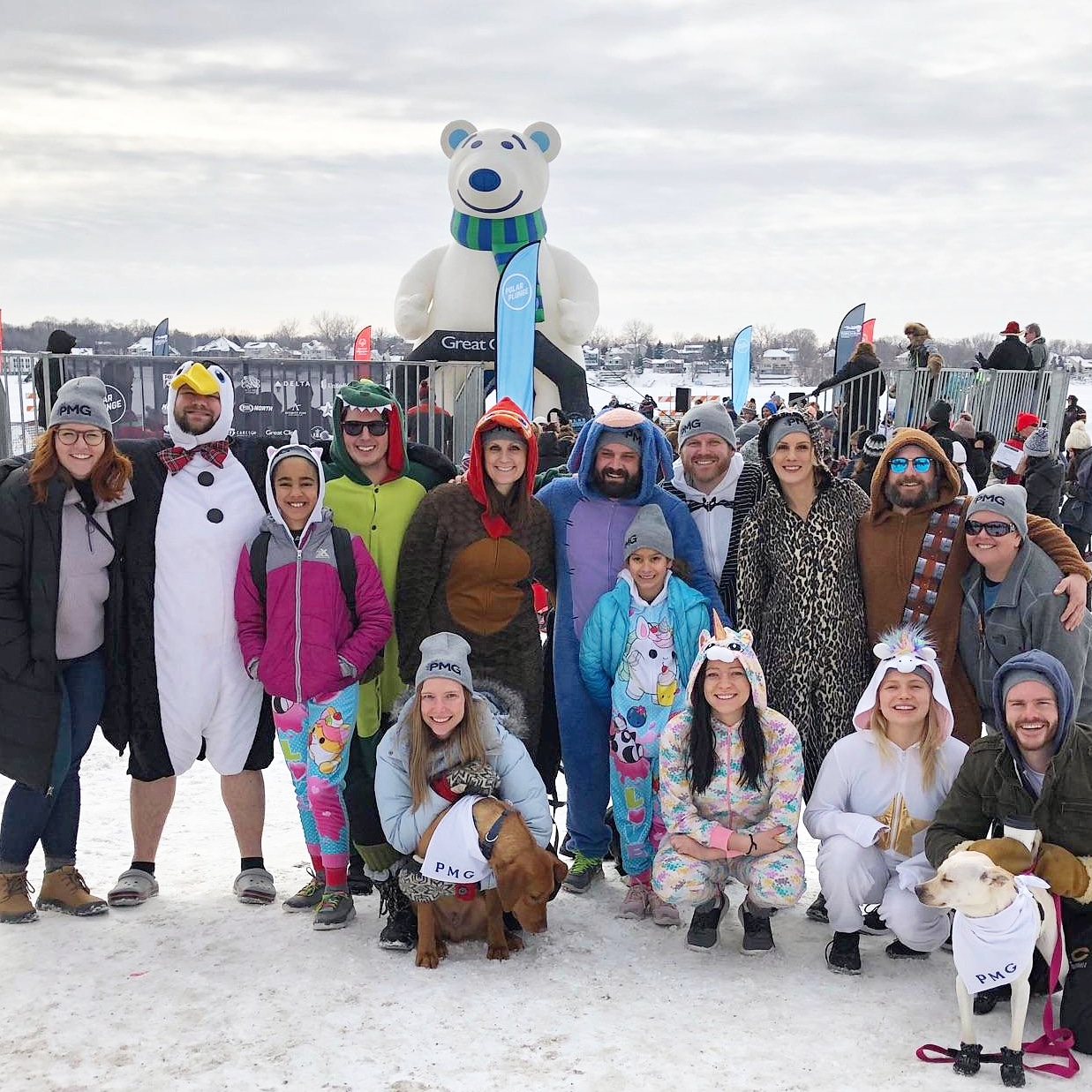 Every year, across snow-country in America, do-gooders and thrill-seekers choose to jump into freezing water to warm hearts. If you’re thinking that sounds crazy, you’re right! It is crazy fun and called the Polar Plunge.

This year, in 21 communities across Minnesota, volunteers from law enforcement agencies, emergency medical services, and fire departments will erect warming tents, inflate giant polar bear balloons, and cut holes in ice thick enough to hold a small city of spectators and volunteers in preparation for their Polar Plunge events to support Special Olympics Minnesota. All that just so more than 11,000 well-intention weirdos can don wigs, tutus, and adult onesies as they jump into a few of our 10,000 lakes in order to raise more than $2 million dollars statewide.

“The plunge is a most gratifying experience. It’s an event for all ages and stages; for those who are looking to stretch their ‘norm’ and do so for a cause. My favorite part of the plunge is walking off the shuttle to a welcoming line of people I’ve never met before, but who are willing to high-five me and encourage me in my efforts for the day. I sense community when I’m at the plunge,” said Kim, PMG TST member.

For the second year in a row, PMG chose to support Special Olympics Minnesota for its Q1 charitable initiative by forming a plunge team and raising funds. The 2.0 version of Team PMG almost doubled its total plunger count (from 7 to 12 PMG-ers) and more than quadrupled its funds raised (from just under $1200 in 2018 to just over $5100 this year). All donations supported the Plunge event held at Prior Lake on February 16, 2019. Money was donated by friends, family, coworkers, partners, and client companies. These efforts led to Team PMG ranking as the top fundraiser among small businesses, top three among corporations of any size, and number seven overall from all donor entities combined for Prior Lake’s Plunge event. PMG is still currently in the top 10 Small Corporation Fundraisers which consists of participants for all 21 plunge events statewide!

“I love the idea of being able to give this gift to children,” said Emily, PMG intern. “As a college student, I would like to give back more, but I do not have a ton of free time or funds to donate. The polar plunge is awesome because this year, I raised $350 just by sharing on Facebook and other networks. I sacrificed maybe an hour of my time for the jump and froze for five minutes… so worth it knowing what that does for the kids.”

To put those numbers in proper perspective, $5000 can help start 10 new Special Olympic delegations across Minnesota, feed 1000 athletes at a state competition, start 20 new respect campaigns in local schools, or fully sponsor 2.5 Minnesota SO athletes for the USA Special Olympics Games.  Those amazing results, and the fun had achieving them, are just a couple of the reasons why it is easy, as an employee, to be proud of PMG.

Justin W., PMG CST member and first time plunger said, “Getting cold for a great cause never hurt anyone. It’s really cool that PMG backed those within the company that plunged and provided so much support for the cause.”

In an ever-changing employment market that is drawing from an ever-shrinking talent pool, it is worth mentioning that millennial and subsequent generations now entering the workforce are almost unanimously cited as claiming that increased opportunities to give back to their communities and build engagement in their workplaces are as important (if not more so) to them than pure compensation and benefits. To put it plainly, younger workers want to work for companies that care.

“I think it’s awesome that PMG is willing to put so much time and resources in to the Plunge,” said Emily. “The Special Olympics of MN is a great cause. In school, we learn a lot about corporate responsibility and PMG is a great example of it. By sponsoring/donating, it shows that PMG cares about so much more than just generating a profit.”

If you’re looking for ways to make your younger workers inclined to feel the same about your company, maybe you should consider doing something crazy next year and take The Plunge!